Hedwig Eva Maria Kiesler was born at the beginning of the First World War in a privileged family in what was still the Austro-Hungarian empire. At the tender age of 16, she was discovered by producer Max Reinhardt and started working in the world of silent movies.

In 1933 she caused a scandal when she acted naked in the Czech film “Ecstasy”. From then on an indefinable atmosphere of controversy will be surrounding the young actress and it will never leave her. 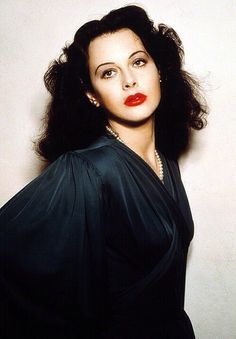 She met Louis B. Meyer in Paris, who was scouting for talent in Europe. Meyer hired her and will later on asked her to change her name. Back in Hollywood he promoted her by saying she was “the world’s most beautiful woman”, no less. It will takes some time for her to re-invent herself as Hedy Lamarr in the US where MGM is still looking to find a new Garbo.

Despite real acting skills and beauty described by most of her contemporaries as truly stupendous, her career on screen fluctuated between failures and successes.
But the beautiful brunette had more than one string to her bow and in 1941, she invented in collaboration with composer George Antheil a revolutionary radio system using the principles of how pianos worked to identify a way to prevent German submarines from jamming allies radio signals. It is still used today for technologies like Bluetooth, GPS and wifi on which we depend on daily.

It was only years later that this major scientific contribution would be publicly recognised as the star’s idea. On the 9th November 2015 which would have been the 101st anniversary of her birth, Google paid tribute to Hedy Lamarr’s contributions to scientific advancement and her work in film with an animated Google Doodle. 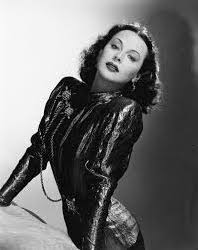 Film star, she was and as such, she married six times and had many love affairs. Her seduction was irresistible however her capricious nature and obsession for her beauty caused her great harm on film sets.

As she got older, Lamarr turned to plastic surgery to preserve the looks she was terrified of losing however the results were disastrous. She had many operations thinking it could revive her looks and her career, but sadly it backfired and distorted her beauty.

Arrested several times for shoplifting, she worked less and less during the 70’s and progressively became a recluse. Forgotten, she died in California at the age of 85 in 2000.
But unremembered in the new century, contemporaries of her hours of glory often spoke of her and always remembered her great beauty.

Lana Turner, another icon of glamour wrote in her memoirs “When I met Hedy Lamarr about twenty years ago, she was so amazing looking that every conversation stopped as soon as she entered a room. Wherever she went she became the centre of attention. I doubt if there was a single individual who wondered if there was something behind that beauty. Everyone was too busy to stare at her, speechless. ”
But the beautiful Hedy was not fooled by her Hollywood impact and she said : “Any girl can be glamorous, all you have to do is stand still and look stupid. ”