Agnes Moorehead was born just at the beginning of the previous century. She studied and gained a degree in literature which was quite an unusual asset in show business at the time. She first began a prolific radio career before joining the legendary Orson Welles’s group Mercury Theater. She acted for the boy wonder in two of his biggest films “Citizen Kane” and “The Magnificent Ambersons”. However beyond participation in these two monuments of cinema and in many other films where she was never lacking in glamour, it is the small screen that will make her more than just a familiar face. By endorsing the brilliant character Endora, the hateful, arrogant, sarcastic stepmother in “Bewitched” Miss Moorehead became a hugely famous figure of popular culture and that status is very much unchanged to this day ! Besides the incessant torment she inflicted with great style to her son-in-law, her intangible and unique look did much for the huge success of the show. Her character dressed in purple ( Agnes often wore that colour in real life ) and green, her almost expressionist outrageous makeup matched her big hairstyles did not make her the most loveable persona however after forty years she is still recognised with a simple glance by several generations of fans. Agnes as Endora still is simply the most famous of TV witches, stylish and always witty ! 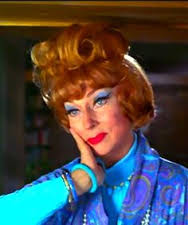